The FENCE debacle and FRAUD was caused by the INCOMPETENCE, DISHONESTY and BULLYING by the Anglican Priest Rev. Canon Prof. Dr John Morgan of St Johns College [SJC]. 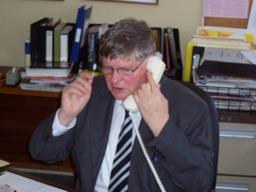 MORGAN, the Warden, is TOTALLY INCOMPETENT.


Soon after I moved in here, Morgan 'phoned me to state that he was from SJC and they "owned" "next door", being what is, in fact, the "rabbit warren", and that if ever I had a problems with noise or anything else at any time of the night,  from his residents, I should phone him and he gave me a phone number that he said would ring right next to his bed, and he would come around and remonstrate with them.   After that, I put up with a lot as I felt guilty about phoning him and waking him at night if  the noise would hopefuly soon stop.  I always try to avoid confrontation and causing strife.


After I had successfully managed to have the Brisbane City Council [BCC] build, at their cost, a new 1.8 metre fence for me on the two street boundaries of my corner block, I decided to have new 1.8 metre chain wire fences built on the other two sides.   I obtained a quote for the new fence.  I have two neighbours who together have a common boundary between them as well as each with me.  The two fences form a "T" shape.   In about the middle of the year 2000, I sent an email to both neighbours, advising that I wanted the new fence, included the quote to give an idea of cost, and asked to have discussions.  I advised that I wished to keep ducks and a dog. It was just impossible to engage Morgan  in discussion. He had all these excuses:  Morgan was too busy.  This was a bad time of the year to ask him for anything; and since I had been here seven years, why did I want a new fence now, when I had not wanted it for seven years.   Importantly, Morgan TOLD ME A LIE AT THIS TIME.  He said that besides anything else, the fence could not be built at all as there was no money to pay for it as there was no money in the budget for a new fence, and that was it, and he was too busy to talk about it.  Later, in an email to me, after all the problems they caused with building the fence ,


Morgan stated in that email to me, dated 18 May, 2001:  "... As you had lived in the house for 7 years there were plenty of other times to get the work requested done earlier - not near the end of the year when we could not contemplate quick action.

[Now: the admission that it was a lie]  I wish now that I had just spent the money and then faced up to my own college council over it. "

He had earlier added ,in a jocular manner, "We will build it and charge you for it".  [See: he is all about taking in money and not paying it out.]   I wanted to discuss this matter further, but all he could say was that,  "We'll build it when we can arrange it: [ie get around to it]".   I asked if they had skills in building chain wire fences.  "Oh yes, we built the front fence at Barrett House."  He was too busy to talk and it was pointless he said, as there was no money and they were too busy.

Soon after, I saw him in the local Coles Supermarket.  I wanted to further the subject of the fence or at least know with some certainty where we were going, but Morgan just said to me, dismissively, "A new fence is not a priority for us": end of story.  He later admitted, in an email, saying that to me, and added his attemnpt to excuse it by saying it was not meant as it sounds.   It is pretty straight forward.  What other meaning can it have?  It was effectively telling me to "get stuffed".

Much later it was agreed that we would build the fences together.  Morgan worked it out with the other neighbour, Prof. Tony Bracken, to build their common fence and charge Tony for it, and St John's College [SJC] [ie Morgan] and I would build the other two fences together.  Morgan said their Maintenance man, one Bob, would act for Morgan and SJC and work it all out with me.  [When it all started to go wrong in the building, Morgan imrpresses upon me, that Bob is an "expert Tradesman". He built the front fence at "Barrett House". It was a timber picket fence. After much investigation it transpires that Bob is a "BRICKLAYER".  Bob had NEVER BUILT A CHAIN WIRE FENCE.  It showed, but only once the fence was well into being built and after I had done all the work that was my share of the job]


The result is that the fence has been built DEFECTIVELY.  If you know anything about chain wire fences, all the strength and rigidity between the posts is dependant upon the strands of wire which are strung, under tension, between the END-POSTS.  THERE ARE NO END-POSTS in this fence.  BOB DID NOT KNOW WHAT HE WAS DOING.  He knew the fence was not being built properly, but still he continued.  The posts are too high. The result is that there is a great gap, varying up to 35 cm,  under the whole length of the fence.  Bob knew it was going badly so blamed me to Morgan so Morgan comes back on me. I complained to Morgan about the defective fence so he had another of his workers, a Bosnian subsidized by the Commonwealth Government,  [MONEY IS ALL THAT MOTIVATES MORGAN], who has no knowledge of building chain wire fences either, report that I do not know what I am talking about and that it is of perfect quality.   Well, the fence is still there.   I challenge Morgan to have it reported upon by someone who knows about chain wire fences.  The fact that the fence has been left like this is more bullying by Morgan.

I wanted the agreement in writing, but Bob refused saying that they were Christians and that writing was not necessary.   It was difficult to pin Bob down to anything.  I agreed to do  ALL the DEMOLITION and  REMOVAL  of the old fences. Additionally, I agreed to dig all of the holes for the posts.  They, SJC/ Morgan/Bob  would do Tony's share of the fence between Tony and me.  They had worked it out with Tony. I dug one hole but I could still not obtain any definite undertaking as to when they would do their share.  There were always excuses.  That hole started falling in on itself so I needed to know when they would be doing it. They would not tell me because they were and are incompetent and totally disorganised. This is all down to the incompetence of Morgan.